Many Choices, One Solution

When choosing an HVAC system for your project, there are four basic types from which to choose. 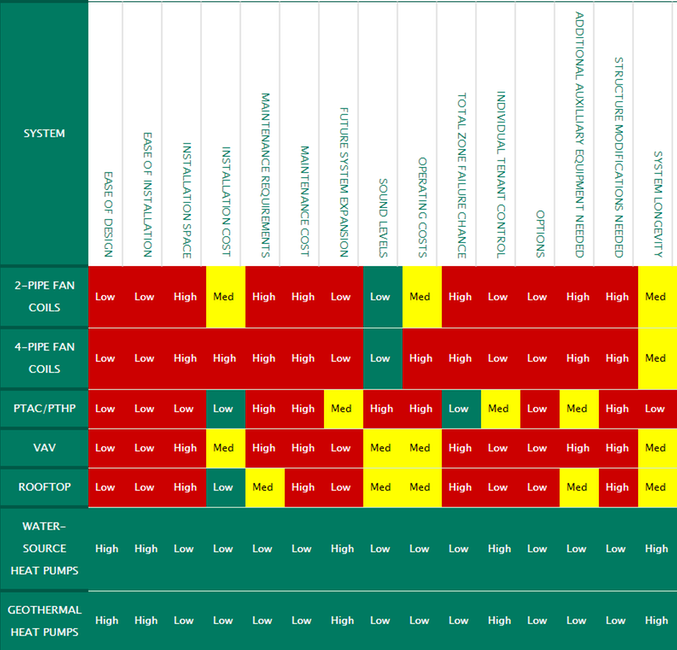 Water-source and geothermal heat pump systems are comprised of individual packaged units that transfer heat via a single- or two-pipe water loop. Each unit can be used in either heating or cooling mode year-round and loop temperature is maintained via a boiler/tower combination or earth-coupled loop. Each zone has complete control of its heating/cooling mode and each unit is independent from the others. This means if one unit goes down, the whole system is not affected. Controls can be as simple as one unit and one thermostat. Water-source and geothermal heat pump systems are the most energy, cost, and space efficient of any system in the industry.

Fan coil systems are comprised of water-to-air coil air handlers connected via a two or four-pipe insulated water loop. Fan coils require complex chillers and boilers to provide water loop fluid in a particular temperature range (i.e., chilled water for cooling and hot water for heating). Two-pipe fan coils have a major disadvantage as control is substantially limited to whatever mode the system is currently set at (i.e., cooling or heating). A four-pipe version can be installed that requires both chilled and heated water to be available at the same time. Four-pipe systems also require twice the piping and twice the circulation equipment of a two-pipe system, which makes a four-pipe system one of the most expensive systems to install.

Variable Air Volume, or VAV, is one of the most common types of HVAC systems used in large commercial buildings today. A typical system is usually comprised of a large air handler, central ductwork system, and a relatively large equipment room. Conditioned air is distributed throughout the building via a central ductwork system and is regulated via dampers in each space.

Rooftop systems are similar to VAV systems in that they use a central ductwork system to distribute conditioned air into the building space. However, instead of one central unit, the system is comprised of multiple units which can be tasked for different conditioning requirements. Rooftop systems usually require additional structural re-enforcement, as well as cranes or other lifting equipment, to place the units. Control in a particular zone is limited to what the system is currently set (i.e., cooling or heating).Rooftop installation costs are low to moderate, but operating costs are typically 50% higher than water-source heat pumps. Additionally, the systems are exposed to the elements and are subject to damage and vandalism.

Visit the DSIRE™ savings locator see what federal, local, and utility energy efficiency incentives are available in your area.