The home, located in the organization’s Faith Landing development in Southwest Oklahoma City, represents an ongoing collaborative commitment between ClimateMaster and Habitat for Humanity to construct all homes in the region with geothermal heating and cooling systems. This provides the new homeowners with both an environmentally and economically sustainable residence. 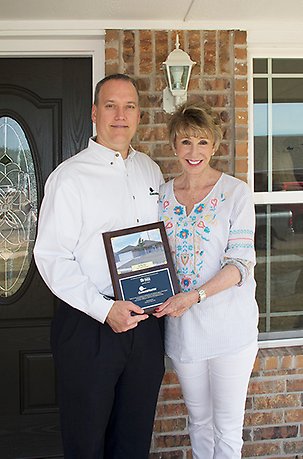 “Thanks to ClimateMaster,and their continued support, we are one of the most energy efficient homebuilders in the state of Oklahoma and among the top in the nation, saving families $700 to $800 on average per year,” said Ann Felton, president of Central Oklahoma Habitat for Humanity. “We value our partnership with ClimateMaster and the ability it gives us in building the highest quality and maintainable houses for the deserving new homeowners.”

According to Felton, since 2006 all 400 geothermal homes constructed by the organization use geothermal heat pumps donated by ClimateMaster. System design, installation, testing and startup services have been provided at cost by Oklahoma City-based geothermalinstalling contractor ComfortWorks and by geothermal driller B&H Construction.

“The completion of the 400th geothermal build by Central Oklahoma Habitat for Humanity represents the significant economic advantages of these systems and their accessibility in the entry housing market. The addition of geothermal heating and cooling into the affordable housing model provides a real way to minimize future costs, be it utility or maintenance,” said ClimateMaster president Rick Aldridge. “We are honored to work alongside an organization such as Central Oklahoma Habitat for Humanity and to participate in the valuable work they do in aiding and bettering our local community.”

“There’s a great sense of pride in knowing that you’ve done something impactful like this, helping those in tough economic times be able to secure a safe, reliable and affordable place to live, and also be in a home that operates as efficiently as possible,” said Chris Ellis, president of Comfortworks.

The 400 geothermal homes built to date, ranging in size from 1,050 to 1,400 square feet, each feature a two-ton geothermal heat pump system from ClimateMaster fed by a single 400-foot deep borehole. Additional features include sprayed-in foam insulation and high-efficiency windows that lessen the burden on HVAC load and further minimize costs and environmental impact.

The completion of the 400th geothermal home also marks the 800th home overall to be built by Central Habitat for Humanity since the organization was established. The home was an all-women’s build, a program for women who want to learn construction skills while building homes and communities, and included the Honorary Chairman of the All-Women’s Build, Robin Marsh, an Emmy-nominated journalist and anchor on Oklahoma’s News 9 team.

Michelle Baker, herself working 300 hours on the house, will be the recipient of the new home along with her four children.

The majority of the geothermal homes built by Central Oklahoma Habitat for Humanity are located in the organization’s Hope Crossing development, which is currently Habitat for Humanity International’s largest green home community in the United States. The five-phase project includes 217 homes with the latest addition to be completed this year.

As one of many that work to support the Oklahoma City area, ClimateMaster will continue to support local causes, in the efforts to build a better community while promoting education on the encompassing benefits of geothermal in the build environment.

About Central Oklahoma Habitat for Humanity

About Habitat for Humanity International

Habitat for Humanity International’s vision is a world where everyone has a decent place to live. Anchored by the conviction that safe and affordable housing provides a critical foundation for breaking the cycle of poverty, Habitat has helped more than 3 million people construct, rehabilitate or preserve homes since 1976. Habitat also advocates for fair and just housing policies and provides training and access to resources to help more families improve their shelter conditions. As a nonprofit Christian housing organization, Habitat works in more than 70 countries and welcomes people of all races, religions and nationalities to partner in its mission. To get more information, to donate or to volunteer, visit habitat.org.

ClimateMaster, Inc. manufactures water-source and geothermal heat pumps, which are considered to be the most energy efficient and environmentally friendly type of air conditioningand heating products available on the market today. Headquartered in Oklahoma City, Okla., ClimateMaster, Inc. For more information, visit www.climatemaster.com.