A home in Salem, Mass., is among the first in the country to be a certified green building while also being listed as a National Historic Landmark.

The Joseph Story House was built in 1811 for Joseph Story, the youngest justice ever appointed to the Supreme Court. Renovations took place in 2006 when Neil and Martha Chayet bought the red-brick house while working with the Historic Commission to keep the house’s historical integrity.

During this time, the Chayets submitted to the tedious application process for Leadership in Energy and Environmental Design (LEED) certification from the U.S. Green Building Council. The Chayets were awarded LEED’s silver rating in March 2009. 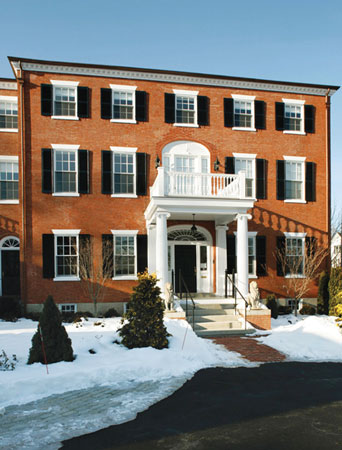 “We take the energy problems of the planet very seriously,” said Neil Chayet.

Among the chief improvements to help the Story House gain LEED certification is a state-of-the-art, ClimateMaster geothermal heating and cooling system that heats and cools the 9,000 square-foot home while using no oil or gas.

The heating system also supplies radiant heating to the floors of the five most frequently used rooms in the house.

How was the system installed? Seven 500-foot wells were drilled into the ground in the front yard to house the loops used in the system.

The LEED certification system allots points based on a long list of criteria that ranges from energy savings to water efficiency.

For instance, it factored in the 88 new custom-fitted thermal pane windows, cell foam insulation installed through the house and timers for bathroom fans.

What makes the LEED certification so impressive is that it was achieved while preserving a home almost 200 years old.

Neither the U.S. Green Building Council nor the National Historic Landmarks program cross-check each other’s databases, but the Story House is thought to be one of the first private homes to earn both distinctions.

A Building Council spokeswoman said she wasn’t aware of any other home that carries both distinctions like the historic Story House.

During construction and renovation, elements and materials were measured against certain LEED home criteria. Marble used in bathrooms and kitchens was quarried in Vermont instead of thousands of miles away. Low-volatility flooring materials and organic compound paints were also used.

The LEED certification scale also considered the location of benches by doors so people can remove their shoes and not track dirt inside and the distance of shrubs from the house to decrease moisture. The house was also vacuum-tested for air leaks.

“It raises your awareness of a lot of things,” Martha said.

The couple said renovating a very old home to earn LEED certification while staying true to historic preservation was much more expensive and difficult than constructing a new home would have been. They were able to defer some costs through a federal tax credit.

“People can get very discouraged because it’s an enormously complicated process,” Neil said of renovating while preserving a 200-year old home. “A few times we asked ourselves, ‘Why are we doing this?’

“But it was the right thing to do, and we’re glad we did it.”