So, when he and his wife started looking for a house in Raleigh, N.C., this type of system became a non-negotiable part of the hunt. “I wanted to show that I could walk the walk, not just talk the talk,” said Harrell.

In 2012, the Harrell family had moved back to North Carolina after several years abroad in London. They knew they wanted a big house for their growing family, but they didn’t want to live out in suburbia. “We wanted a village-like feel where we could connect with the neighborhood and the community,” said Harrell. 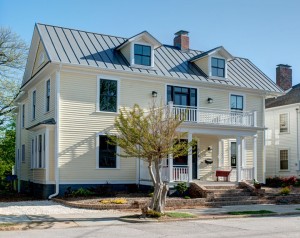 The Harrells decided they wanted to live close to Raleigh’s downtown, in an urban environment where they would have access to everything without having to drive. Harrell hadn’t even owned a car in more than six years, and wanted to live in a walkable neighborhood. “We were striving to live a more sustainable lifestyle and do more with less,” he said.

After researching some target areas near downtown, the Harrells opted to rent a place in the historic Glenwood-Brooklyn area, a neighborhood that was built in the early 20th century not far from Raleigh’s business district. They soon fell in love with the neighborhood and started looking for suitable homes to buy there. While not an obvious choice, what ultimately caught their attention was a run-down 100-year-old home that had been converted into a quadriplex.

“There was significant overgrowth, and it even looked like the front steps were unsafe,” said Harrell. According to Harrell, the smell from the house’s decay was overwhelming. But despite all the challenges, he saw that it had a solid core and shell and believed, with some renovation, it could be the house of his family’s dreams. Plus, he was pre-disposed to like it. “I just have a thing for historic homes,” said Harrell.

Located in a historic district, the home was also a likely candidate for historic preservation tax credits. Harrell worked with architect Meg McLaurin from Meg McLaurin Architecture, who was known for her experience with restoring historic homes. McLaurin’s job was to investigate preservation tax credits and create a strategy for maintaining the integrity of the home’s original design. Together they developed a plan to completely gut the house and restore it as a single-family home.

With the house backing up to Fred Fletcher Park, McLaurin additionally designed a glass wall at the back of the home that would highlight the park’s proximity. “When you open the front door you can see all the way through the house to the wall of glass to the park beyond,” said McLaurin. “It breaks down the inside-outside barrier.” 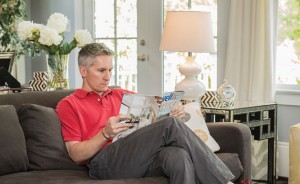 With the project shaping up to be all he had hoped for in respect to a historic renovation, Harrell turned his focus to making the home as energy efficient as possible. In doing so, he quickly realized that the two tenets are often at odds, including with efforts such as installing rooftop-mounted solar panels and modern high-efficiency windows and doors.

“The historic preservation commission had a strong stance about these things, as they ultimately compromise the home’s original façade,” said Harrell.

General contractor Greg Paul, owner of Greg Paul Builders, provided some much-needed guidance in this respect, having a great deal of experience with sustainable buildings and retrofit projects. He started by working to insulate the home and tighten the building envelope.

“We had to go underneath the house so that we could seal the crawl space,” said Paul. “That’s a little harder to do crawling on your belly in an existing space than in a new construction job.”

Working together on the renewable energy technology that Harrell wanted to incorporate, no matter the measure, Harrell and Paul turned next to how they would retrofit a geothermal heat pump system.

“I kept saying that I was not going to take no for an answer,” said Harrell. “I absolutely needed this superior HVAC technology in order to achieve my energy efficiency goals for the home.”

When reaching out to his go-to mechanical contractor, Greg Paul was told that despite Harrell’s feelings, geothermal was just not a possibility. “They said that Chad’s house wasn’t a candidate for geothermal because there was nowhere to put the borehole field,” said Paul. The Harrell’s backyard was just too small. “But that just made Chad all the more determined to do it,” he said. So, Paul went to another contractor for a second opinion. 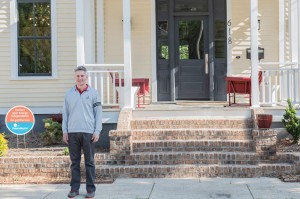 That second opinion came from Louis Agnolutto, the owner of Louis Heating & Cooling, Inc. He and his team ultimately decided the best solution was to drill two 435-ft deep boreholes sideways in the front yard of the property, one on each side of the porch.

“Each borehole has two inch-and-a-quarter pipes. One takes the water down and one brings the water up,” said Agnolutto. “The boreholes are also registered with the state according to their GPS coordinates, just in case anyone ever needs to know exactly where they are.”

Agnolutto has been installing geothermal heat pump systems since the 1990s. He said he has used many manufacturers’ equipment, but always comes back to ClimateMaster. “I decided on ClimateMaster for a couple of reasons,” said Agnolutto. “They make a good basic unit. The cabinetry is sound and solid. The equipment and parts are proven.” 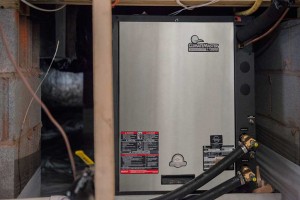 “I’m using all ClimateMaster products, I’m not using anything else,” said Agnolutto. According to him, this is partly due to the fact that ClimateMaster units are easily customizable to fit the energy needs of his clients.

The overall renovation timeline spanned a little less than seven months (winter of 2012 to spring of 2013) from beginning to end—with the HVAC installation taking place during the last month of the timeline.

“We were able to move into our home just a couple of weeks before the birth of our twin daughters,” said Harrell.

According to Harrell, federal and state tax credits for historic preservation and the incorporation of renewable energy technologies were key to the financing of the project.

David Parker, president of security and energy-efficiency firm E2 Technology, consulted with Harrell on how to best achieve his energy efficiency goals while maximizing tax incentives. This included reaching ENERGY STAR rating specifications and those of the North Carolina High Efficiency Residential Option (HERO) code, both of which would defray some of his energy and building costs.

“We sat down and set up a plan as to how we would certify the home to those standards,” said Parker. “By certifying the house to ENERGY STAR standards, for example, the Harrells are eligible for a five percent rebate on their gas and electricity bills throughout the life of the home.”

In addition, the builders tried to minimize construction waste as much as possible and to preserve as much of the core materials as they could. For example, they used original beams from the house, made from 200-year-old wood, to build a new staircase in the home’s addition.

Greg Paul agrees that the project required a lot of effort, but that the effort was well-directed. “The house is super energy-efficient, particularly within the realm of historical work,” he said. “Those two things are hard to bring together, but I think in this case we were able to play both sides of the fence pretty efficiently and satisfactorily.”

So, Any Heating and Cooling Bill Savings?

As for Chad Harrell, he couldn’t be more pleased. “I think it turned out to be even better than we anticipated,” he said. The family, which includes three small children, moved into the house in May of 2013. Since then, he estimates his energy cost savings at about 50 percent, at least compared to neighbors with homes of approximately the same size. In fact, some of his neighbors have said they’ve been encouraged to consider installing geothermal heat pump systems in their own homes, now that they know it can be done.

With many project elements to highlight, Harrell admits he is most proud of the energy efficiency makeover, and particularly persevering in the home’s retrofit geothermal system. In fact, he is taking a “Say it Loud, Say it Proud” stance, and doesn’t much care for the fact that landscapers were able to skillfully camouflage the boreholes with mulch and a flower bed.

“I want to put up a sign in the front yard that says, “Renewable Energy: At Work Under Your Feet,” said Harrell.